This is the typical form if of a Ginseng or Pot Belly Ficus: 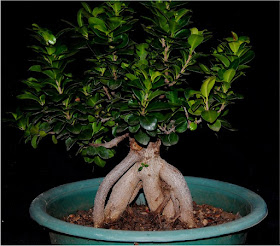 All over the world this characteristic is used to grow the thick roots even fatter by using different horticultural techniques. One technique that is used is to reduce the roots to three to five roots- the more roots there are on an average size trunk the thinner the roots will be.

This characteristic can also be find on other Ficus species. Here is a Ficus natalensis that was removed from the rotten core of another tree: 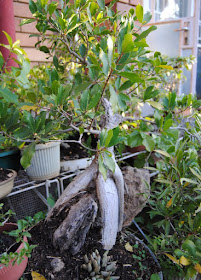 It seems that intervals of drought and watering encourage this kind of roots forming - in these conditions the tree relies heavily on the stored water and energy in the "tubers".

Most of the trees in the bonsai trade have another variety of Ficus microcarpa grafted onto the roots. The other variety has greener, shinier and rounder leaves and the nodes are much shorter between the leaves as with the original species.

Here is the grafted growth on the left and the original growth of the tubers on the right: 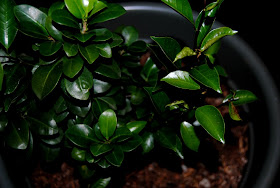 Notice also that the tubers leaves are more prone to the common leaf distortion on Cuban-laurel caused by a little black thrips from southeast Asia. The leaf responds to the sucking type feeding of this thrips by
folding upward along the midvein. This results in a misshapen leafroll that resembles a pea pod. Here the offspring are raised in the safety of the folded up leaf. 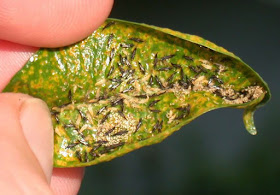 The exposed fat roots are frowned upon by the bonsai community because the fat exposed roots look very unnatural. If you like the roots the crown can be shaped and it becomes a nice oddity - at bonsai shows it is usually the tree that get the most remarks........although not always very positive remarks!

Here is one of mine I have styled:
(Side A and B, from the top and defoliated.) 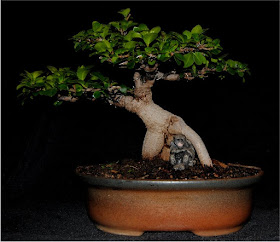 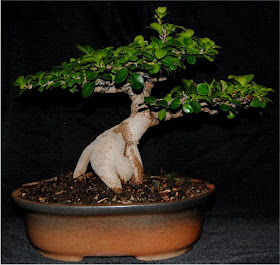 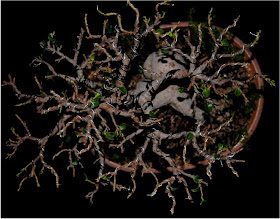 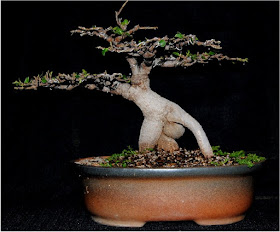 Although it is true that the Ginseng Ficus, as is, does not make a very convincing bonsai, it is not true that the material can not be used to grow a bonsai.

Sometimes, by selecting the right tubers, you can have a convincing trunk: 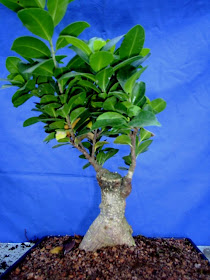 Here the grafts and chop are clearly visible.

Here is the trunk today: 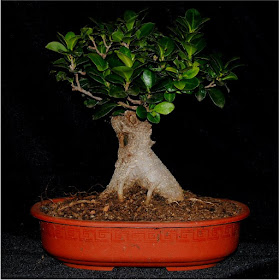 Notice where the third tuber was removed: 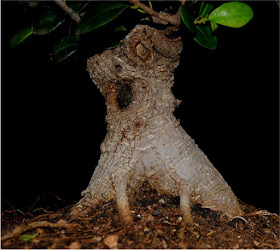 The graft is also very noticeable in this picture because it tends to form meristematic  tissue. This growth will have to be carved away or hidden by the canopy. With this experiment the crown will be shaped next summer.

Here is a pic of the removed root bearing the original species's leaves: 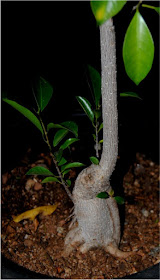 Notice the new thinner roots forming at ground level as well as the longer nodes than the grafted species. You will also note a aerial root that has fused to the old root. The new trunk will be chopped next summer to develop the tree into a semi-formal or a broom.

The fat roots can be air layered:
(Credit to Dario from Ausbonsai:  http://www.ausbonsai.com.au/forum/viewtopic.php?f=133&t=14337&hilit=ficus)

Here is the tree before with the area mark where the layer will be done: 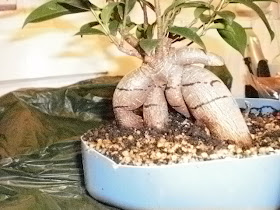 The bark and cambium removed: 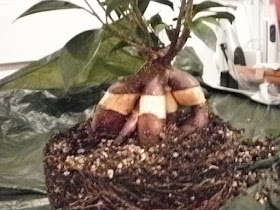 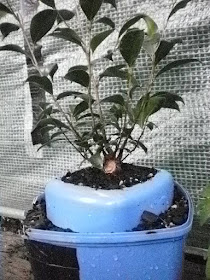 Removed from the pot: 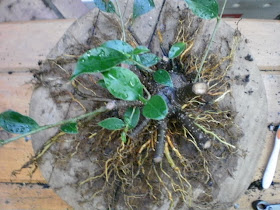 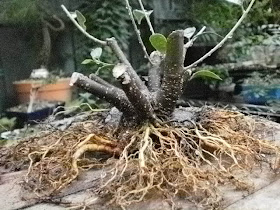 The old fat roots below the layer rotted away: 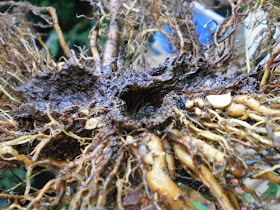 The rotted area were cut away and the edge smoothed and some roots removed: 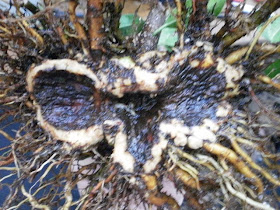 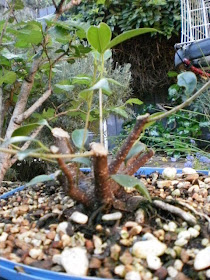